An American in Belgrade - from Mr. Siniša Pašćan

Flexibility, agility and adventurous spirit, came up with another Sinisa talent, writing fiction. That is how the novel "An American in Belgrade," which was published in March, 2007. year. 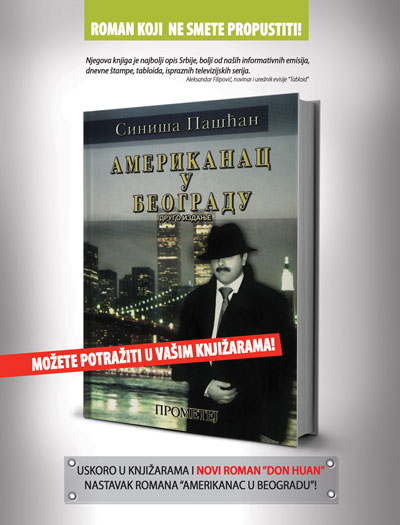 The implementation of the theater by title and referred to the novel "An American in Belgrade," the prime minister is expected in August 2012. in the theater under the direction of Zoltan Friedman.

If you are a foreigner, while another American, and stay in Serbia, it is you, rather than guide and map, a necessary and this novel Sinisa Pašćan that realistically, very convincing, talking about our mentality and opportunities in the country - especially the colorful world of lies, deceit, heartless violence, corruption and crime.

The Author is not accidental, action situate in Belgrade, which is displayed before the eyes of readers as a city of criminals, a springboard for entry into the European underground.

The main characters of the novel are brothers, Michael and John, who, after four decades of separate life, for the first time lucky. Their life stories are very different, and how the story will develop further, you will find out by reading this exciting novel, full of unexpected twists, irony, bitterness and distaste for our nature ...

In March 2012th year, there will be book called "Don Juan", which at the same time a continuation of the book "An American in Belgrade."